Most of our data are stored on MySQL and Cassandra, MySQL was the primary data-store when we started up the company. Currently our MySQL workload is located at AWS RDS and we would like to give a try to Microsoft Azure. This writing is to document a few tricks we learned to reduce the total time of dump, transfer and restore. Hope it can help you too.

It was a team effort and we wouldn’t be able to successfully complete it without Pablo Romanelli and Emiliano Perez efforts and dedication. A lot of we accomplished and learned together was based on other posts and I tried to give all links and credits.

We were pretty impressed about Azure performance and support to opensource software, I was biased about Azure thinking it would only work for Microsoft Servers or .NET workloads, it was a nice surprise see it plays nice with FOSS.

Although it still doesn’t have all the AWS features, one that we missed on this point was a MySQL Managed Service as RDS. So we had to build our own MySQL server from scratch.

Besides that our work was pretty straightforward, represented by this steps: 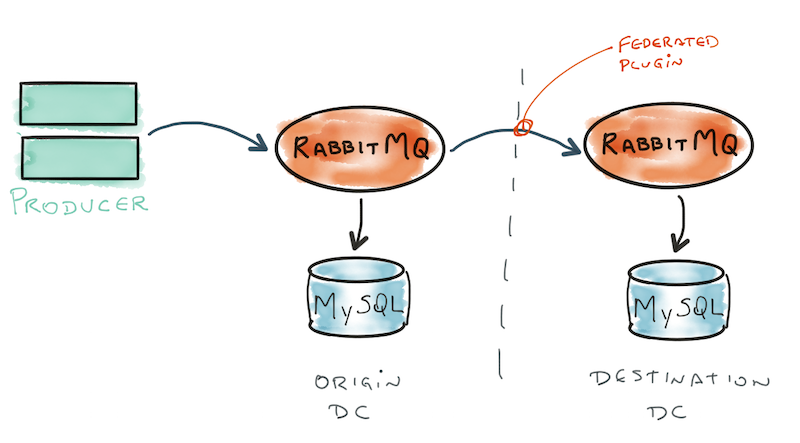 Luckily our system communicates through RabbitMQ, using a Message-Passing pattern, so we have been able to use RabbitMQ Federation Plugin to keep ingesting and processing data in AWS while replicating it to Azure.

Of course, it is important RabbitMQ machines must be beefy because messages will start to accumulate and pressure to the system will be generated. We were sure we could keep up with data ingestion rates during the migration.

We are interested in replacing RabbitMQ for Kafka which would be much easier to migrate and no pressure would be generated on the system. This is for another writing ;)

Once all writing processes have been stopped, we can start a dump. Those options were we achieve best performance on both dump and restore, we assume you’re using InnoDB storage engine.

Be notified when the dump process completed

Some of ours databases are big (> 100+Gb) and the dump process can take several hours. So we came up with a simple notification script that check for a file and start transferring data when it is found:

Also we had to access a filesystem location where sudo was required, it was achieved adding the parameter --rsync-path "sudo rsync"

The complete command line was:

Finally the longest time spent on moving the databases where in restore phase.

A little bit about hardware, besides lots of memory, we found the best combination for high performance was using RAID10. We used Azure Premium Storage which is equivalent to SSD disks. We tried with HDD 15K disks but it didn’t give us the desired performance.

We also learned a few MySQL variables should be tunned to get the best performance:

This answer in DBA StackExchange summarizes beautifully all parameters.

Creating a beautiful tagcloud from hashtags