A couple of years ago I created a Spotify’s playlist where I add all tracks I liked, just as the main repository of things I’d like to listen to, no matter the mood I was when I added that song. As time goes, this playlist became less enjoyable to listen due to the change in rhythm - From listen to a Metal song it jumps to Bossa Nova, which is very annoying. This post contains a few data science approaches I applied to organize this playlist and what worked and what didn’t.

I had this idea of organizing this playlist, but didn’t know where to obtain the metadata for the songs, my intuition was I had to extract BPM (Tempo) from each song and organize it. It would be very time consuming because I’d have to download MP3 files and extract meta-data; So the project kept buried for several months.

A few weeks ago I stumble on this post: Can a Data Scientist Replace a DJ? Spotify Manipulation with Python and suddenly I realized all information was already provided by Spotify’s API.

Execute notebook, including cell fetch_playlists(sp,username), which will list all your playlists, copy the playlist ID you would like to analyze, mine is 4FO6rgOkMYPlIg8Zt7CK2v. Complete the cell:

Run the entire notebook and my-playlist.csv file will be generated. It is the input to test approaches.

Because this is not an annotated dataset and if a song is more stimulating than another is a matter of taste, I just randomly checked a few songs to try to get the feeling it is ordered correctly. I know, not very scientific.

You can follow along the analysis on this notebook.

You can find a complete description of features on the API docs Audio Features, our file contains columns these features:

From intuition, seems danceability, energy, tempo and valence are the most descriptive features to organize a playlist.

Checking this plot is pretty obvious why this playlist is so annoying to listen linearly, metrics are all over the place! 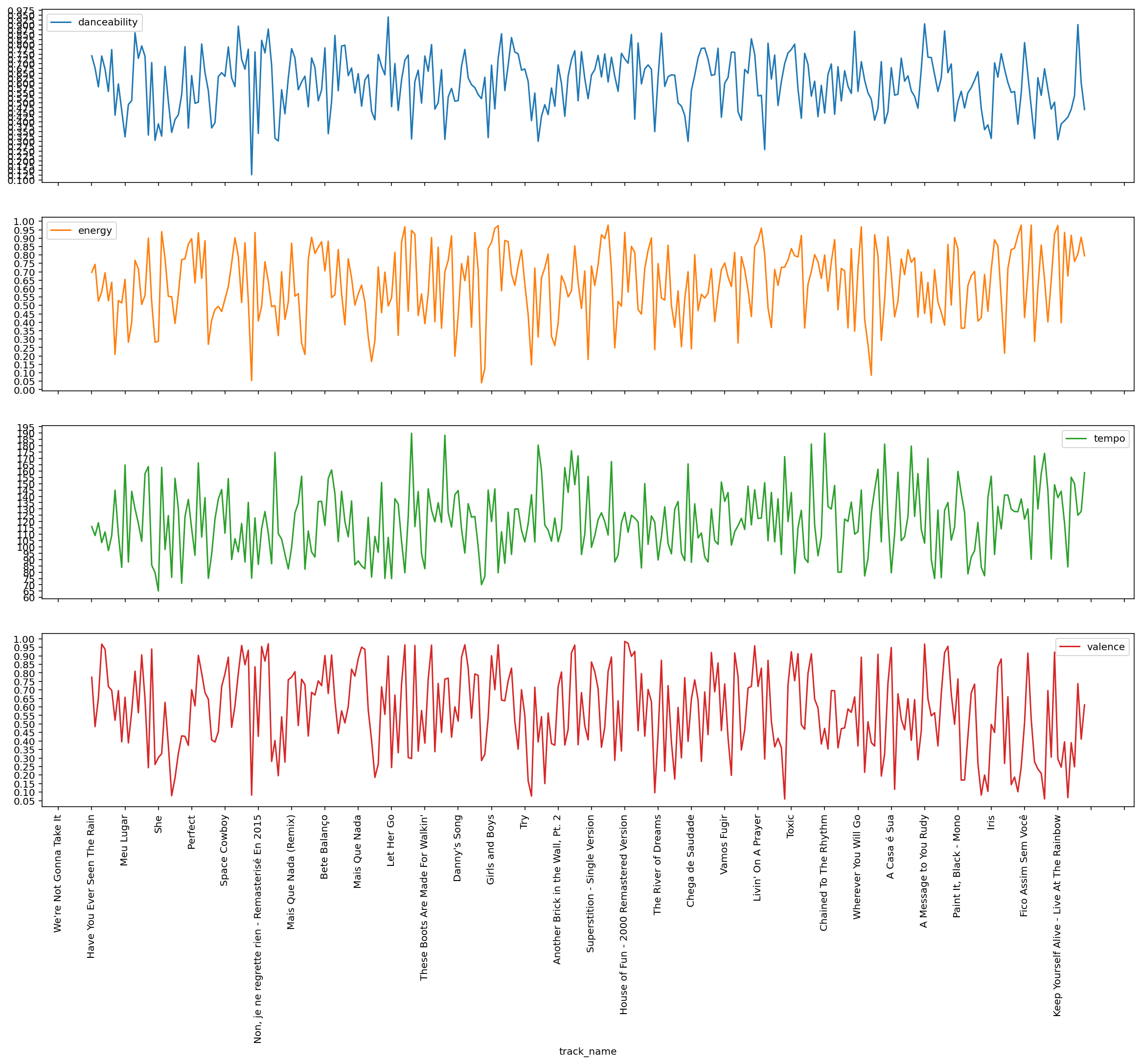 Following my first idea, I simply ordered the whole playlist and to evaluate results, I got a sample of 10 songs and ordered by Tempo: 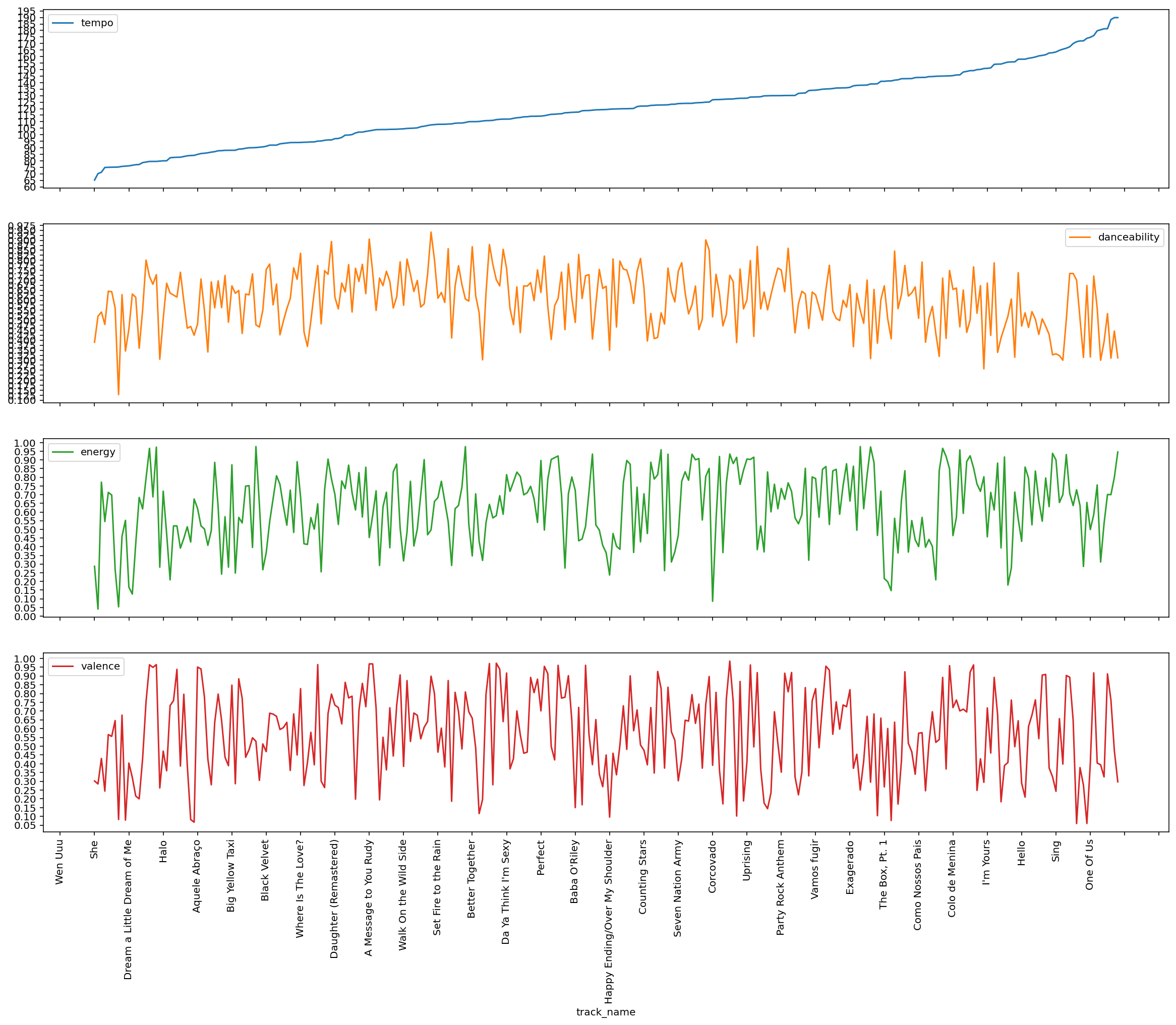 Although there are a few songs that “landed” on the correct order, this is not the case for most of the songs. For example: Paranoid is stronger than Meu Lugar.

I also tried to sort by energy with much better results:

I took this opportunity to learn a little more about PyCaret, it is an open-source, low-code machine learning library in Python that allows you to go from preparing your data to deploying your model within seconds in your choice of notebook environment.

It has a nice API and removes a lot of boilerplate to do common Machine Learning tasks, such as data preparation, algorithm selection, feature engineering, and model analysis.

Most of the steps I took to cluster the playlist were based on this tutorial: Clustering Tutorial (CLU101) – Level Beginner

Also I recommend reading this post, as it is a comprehensive tutorial to Build and deploy your first machine learning web app

This notebook contains the cluster analysis.

I applied a k-means cluster, applying feature normalization and after applying the elbow score, I’m using n=6. The result isn’t as promising as I expected, it is true clusters contain similar songs as one would expect, but there are strong outliers in the songs. 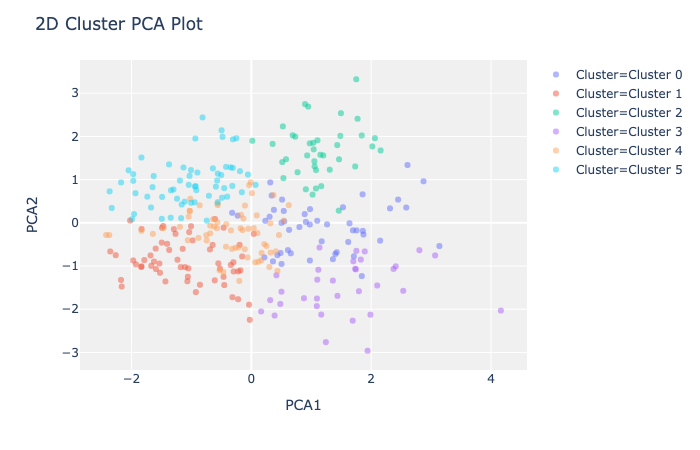 Interactively I tried different clustering modules but got a poor division of clusters, which may indicate we need to add features that would help to better describe separation among songs - I don’t have this information at hand, but would like to add the language of the song as another feature (this playlist contains Portuguese, Spanish, English and French songs).

Z3 is a theorem prover from Microsoft Research with support for bitvectors, booleans, arrays, floating-point numbers, strings, and other data types. I recognize it is overkill to the problem but were fun to learn more about this awesome library.

I started to wonder what if I manually classify a sample of songs and then using model constraint solving I could derive values of danceability, energy, tempo and valence, the idea would be like a regression but I don’t care about the value per se, just the order of the songs.

This approach didn’t work due unsatisfied conditions, likely because my taste on ordering the songs doesn’t comply with a mathematical weight of these variables.

I enjoyed learning about Z3 and remember a few Computer Science classes, so it wasn’t a total waste of time.

For now, I could achieve my objectives using simple exploratory data analysis and sorting by Energy, of course the awesome work done by Spotify’s data science team that came up with those scores.

I intend to stress more PyCaret and see how strong it can be on a real project, it is very appealing the speed, easy to use, and deploy this tool put together.

If you are curious, here is the final playlist My Machine Learning Music.

Setting up Macbook Pro for Development